Making the shift into who you desire to be

You have all probably heard the phrase: think it, feel it, become it.  Its often used to reference a process of transformation in becoming something that what we desire to become.  We use our thoughts to think it, then our feeling bodies to feel the qualities we want to become, and through feeling it we become it.  When we want to become something anew there is often also a process of simultaneously undoing who we have previously thought ourselves to be as frequently who we desire to be now is in conflict with what we currently think we are.

Most of us aren’t even really aware of who it is that we currently are and even beyond that. that who we are is a choice.  We don’t realize that we carry many underlying assumptions and hidden beliefs about ourselves that are based on our life experiences.  If fact most all of who we think we are has been based on our life experiences.  How frequently does it seem that our life experiences have just happened to us, particularly early on in our lives when a large portion of our identity is formed, but even continuing through into the present?  Therefore how much do we just assume that this is “just who I am” and not question it or think that we could ever be different?  This is one of the conundrum’s of having lived disempowered and not realizing that we have always been in the driver’s seat.  If we begin to see/accept that we have chosen every single one of our life experiences (this occurs through acceptance of what was/is) then we can begin to see how our identity has been chosen by us.  This is a breath of fresh air because that means we can also choose anew at any moment.

The assumptions we have about who we are also come with a lens of perception.  That lens of perception becomes the filter with which we then view ourselves through.  Meaning say that we have an assumption that we are weak, strong, cold, warm, unloving, loving, kind, unkind, likable or unlikeable, etc. then we experience ourselves as those qualities and we also view our world from that perception of ourselves.  This is quite literally how we “create our reality”.  Our reality is created by who it is that we think we are and that lens of perception than filters everything we see.  This is why if we want to change our reality (i.e. experience of life) we must actually just change ourselves, as reality follows our perception which comes from our sense of identity. 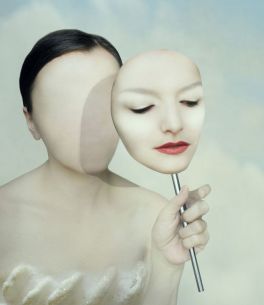 One of the ways to bring more awareness to the self-discovery process of who it is you believe yourself to be is to take a look at your roles, and the responsibilities and activities that come along with them.  These are often indicators as to who it is we think that we are.  Perhaps you are a business man/woman, a scientist, doctor, community leader, a father/mother, daughter/son, wife/husband, an organizer or planner, an athlete, outdoorsy, indoorsy, a reader, an adventurist, etc.  Looking at your roles provides insight into who it is you identify yourself as being.

Again who it is you identify yourself as being is how you will experience yourself and the world.  Let’s say for example that you have the role of being a “wife” or an “athlete”.  Often when we take on a role, we identify as being that role.  You think that you are a wife or an athlete and therefore that role becomes part of your identity.  Every role always comes with some level of expectation of how we must show up within that role.  That expectation could be created by us or have been created by others.  Either way if we’ve agreed with ourselves that a particular expectation lives within a certain role, and if we don’t fulfill those expectations, then we take it as a personal deficit.

The truth is that we are not our roles, nor the responsibilities or activities that come along with them, but because we are merged as the role then when we don’t meet those role’s responsibilities or perform the activities associated with the role we feel bad about ourselves.  The self that we feel bad about is not our true self.  The self we feel bad about is only the one with which we’ve come to identify ourselves as through becoming the role.  To relinquish being merged with our role’s identities doesn’t mean that we can’t/don’t still participate in the responsibilities and activities that come along these roles.  It simply means that we don’t identify ourselves as the role.  The falling away of being merged with any and all roles is what allows you to taste and know your true self, which is beyond any and all roles.  This is the final becoming.

Simply put the process is this.  Fully accept yourself as you think you are right now.  Investigate your roles and decipher who it is that you’ve created yourself to be.  See how that has filtered your entire perception of life.  Recognize the power of think it, feel it, become it.  Who is it that you desire to be now?  Through full acceptance of who you’ve been there is no longer resistance or incongruence with who you are wanting to become.  Think and feel your current desire of who you want to be often.  Realize that the final becoming is the embrace of all the things you have thought that you are not.  This allows you to realize that you are all and ultimately that you are the chooser/becomer of whatever becomes and not the becoming itself.